Data Processing Centre under Support Services Wing of Pakistan Bureau of Statistics mandated to provide support functions by developing software/applications programs to carry out Data Processing for national census and survey in line with policy priorities and plan. It provides both generic and specific IT supports for all the activities i.e. collecting, compiling, analyzing, abstracting, publishing, marketing and dissemination of statistical information relating to the Commerce & Trade, Industrial, Financial, Social, Economic, Demographic, Agriculture and any other area specified by the Federal Government. It also provides technical and scientific advice to the Statistical Wing as per IT perspective to achieve their goals in smooth and swift manner. DP Center services are not limited to Census/Survey Data Processing, it is also an In-House IT consultancy organization to all functions of PBS whether it is technical, management and administrative.

The Support Services Wing of PBS is responsible for implementing the systems and procedures required to process the data pertaining to censuses and surveys at PBS Headquarters, Islamabad i.e. centralized processing site. The wide range of data is publically available in form of Publications / Tabulations on the website of PBS having URL: http:/www.pbs.gov.pk. However, demand for data is increasing tremendously and that too in computer readable form on computer tapes/diskettes etc. Such demands are made mainly by various Government/Semi-Govt., Non Government Organization (NGOs), Research Institutions, and Universities etc. within and outside the country.

The GIS Wing under Support Services Wing is also playing vital role establishing, developing and maintaining a holistic National Statistical and Spatial Data System (NSSDS) and Integrated National Statistical and Spatial Database (NSSD) by providing map-digitizing facility, for accuracy and better visualization of enumeration area using imagery. These maps are pre-requisites for Enumerators in the field for identification of their assigned areas for various surveys and censuses. Various GIS techniques i.e. Infographs, Heat Maps etc. can be used to display of census and survey data on Digital Maps in addition to Transformation of manual maps into computer based/digital of Enumeration Blocks. There is so much that we can do with a GIS technology, the most common example is making layers with data showing all sorts of different variables of a community to help inform decision makers and inform the public. For example, useful GIS based interface would be used to see how many schools, hospitals/ health facilities around a point of a map (we click), and map that with educational levels, infant mortality rate and income, etc. This data hopefully exists anywhere in the country, but making a visual representation and sharing with the policy planners, will help drive action and inform decisions. Ultimately, this will only save the cost incurred on redundant projects but will provide basis for utilization of funds in prudent manner.

The Data Processing Center of PBS apart from various other regular Censuses and Surveys presently enganged in following assignments:-

In pursuance of Member (Support Services) vision of end-to-end ‘real time’ data collection directly from the ‘interviewee’ bypassing multiple stages i.e. Punching, Cleaning, and Digitizing to produce ‘credible data’ by reducing ‘time tag’ between its collection and final publication, a first ever android based application is developed (in-house) by DP Center, Support Services Wing and was tested in field successfully. Since, the Price statistics serve very important uses in monitoring the economic performance of a country and the welfare of its people. They are used for a wide variety of purposes, such as in the formulation of monetary policies, determination and indexation of wages and social security benefits, computation of per capita income in real terms, implementation of contractual escalation clauses, etc. Thus, the Consumer Price Index (CPI), together with the national accounts and unemployment rates, are probably the three most carefully watched indicators in any economy.

What is Tablet Based Price Collection System?

All the price indexes discussed in this presentation are disseminated monthly except for the SPI, which is released weekly. Data collection, compilation and its processing involve huge cost. Therefore, it has been decided that the data users (other than government agencies) must share the cost of data. The charges of data to be recovered from users are given in the following schedule. The amount will be deposited in the Government treasury by the user and a copy of the challan/receipt will be provided to PBS. The user will also supply diskettes/magnetic tapes etc. to PBS for collecting the data. Demand for data is increasing tremendously and that too in computer readable form on computer tapes/diskettes etc. Such demands are made mainly by various Government/Semi-Govt., Non-Government Organization (NGOs), Research Institutions, and Universities etc. within and outside the country.

Pakistan Social and Living Standards Measurement Survey (PSLM)'s District Level Survey is being conducted by PBS since 2004-05 at alternate years. It was the biggest source of monitoring of MDGs. 15 out of 37 indicators adopted by Pakistan were monitored through PSLM.  In Sep-2015 United Nation has adopted Sustainable Development Goals (SDGs) with 17 goals, 169 targets & 232 indicators.

Pakistan was the first country in the region whose parliament has adopted the Sustainable Development Goals as “National Development Goals”. Therefore work has initiated to find data gaps on reporting & working on Surveys to include different indicators.

PBS being National Statistical Office is declared as the main agency for data monitoring & reporting by United Nation Statistical Department (UNSD). Accordingly PBS by taking relevant stakeholders on board amended their existing surveys to include SDGs indicators and also prepared data gap review report along with SDG unit in Ministry of Planning Development and Reform & United Nations Development Programme (UNDP). The Data Gap report revealed that PBS is the main reporting agency with 66 indicators & from which 53 indicators will be covered through its existing surveys/census & National Accounts. Out of 53, 29 indicators will be monitored through PSLM/HIES Survey.

It is pertinent to mention here that considering the requirement of SDG indicators after PSLM questionnaires were thoroughly reviewed and they have been amended to monitor SDGs. The significance of PSLM District level survey 2019-20 is inclusion of the modules on Information Communication & Technology (ICT), Food Insecurity Experience Scale (FIES), and Access to basic Services, Assets, Hygiene & Waste management along with Disability and Migration which is going to be included for the first time to monitor the one of the most important indicators for SDG’s. Recent data is not available for both indicators, even if it is available then it is not truly representative.

It is highly appreciated that the PSLM section along with Data processing Center has planned the PSLM district level Survey 2019-2020 on Tablets. Member SS/IT and PSLM section took the initiative of shifting the tool of data collection from laborious method i.e. from paper based questionnaires to the Tablets. For this purpose Android Software is developed by the data processing center in vigorous consultation with the subject matter section.

Due to shifting of data on Tablets and significant change in questionnaires, 5-days comprehensive training workshops were scheduled in a way that three teams (comprised of four members 2 each from subject matter section and two from Data Processing Section) at Karachi, Quetta, Lahore, Sukkur, Peshawar, Multan, Abbottabad, and Islamabad have imparted training. Two days training for master trainers along with staff of Rawalpindi Regional Office have been conducted on 28th and 29th August, 2019, the expert from Disability organization Community Based Inclusive Development Network Pakistan (CPID) & Sight Saver also participated in training on disability. Field activities of PSLM District Level Survey on Tablets will be starting from first week of the October 2019. However listing activities started immediately after the provision of Sample list to Regional Offices. Member (RM/SS) inaugurated the training at Karachi office while DDG (PSLM) inaugurated the training at Islamabad.

Main Objective of Mauza Census is verification and upddation of Mouzas/ Dehs/ Villages/ Killies lists by administrative units which serves as a sampling frame for drawing sample for Agricultural and Livestock Censuses, it also provide aggregated statistical data on socio-economic characteristics of Mouzas/ Dehs/ Villages/ Killies regarding Agricultural Structure & livelihood of farmers, Collection of information regarding Infrastructure and Services Availability for evidence based policy making. It provides data with periodic interval about Socio-Economic Development Indicators relating to Rural Community at a Basic Administrative level.

Consultative meetings with Advisory/Technical Committee have been conducted in which Questionnaire, Manual of Instruction and Phase wise Field operation Methodology have been finalized. Approval regarding Administrative matters, Engagement of Provincial Governments/BORs for Field Operations has also been accorded from Governing Council (in April 2019).

Mouza Census will be conducted by Staff of Revenue and local government department of respective province. In this regard necessary letters has been issued to Chief Secretaries by Secretary (PD&R) for cooperation and conduct of Mouza Census 2020.Accordingly focal persons from all four provinces AJK & GB from respective Bureaus of Revenues have been nominated for coordination regarding smooth conduct of Census. The meeting of all focal persons was held on 29th November, 2019 at PBS Headquarter under the chairmanship of Member (RM/SS), who briefed them about the process of conduct of Mouza Census & its importance, further he requested for cooperation from provinces for successful completion of this National Task.

Pakistan Bureau of Statistics has successfully conducted the training of Master trainers, training has been imparted from 02-18 December, 2019 at eight different stations. The field work of Mouza Census will be done in three phases from 01st January, 2020 to 31st March 2020. All District Coordination meeting in Punjab & Sindh has been completed successfully & training of enumerators at tehsil level will be conducted in 1st January 2020 followed by field collection in the month of January 2020.

Central Statistical Office was established in August, 1950, which used different electro mechanical equipment such as Tabulators, sorters etc for compilation of Statistical Surveys/Censuses data. In computer field, rapid changes have been experienced from time to time due to which latest computer systems (hardware/software) were used after replacing the obsolete ones, Detail of which is given below: 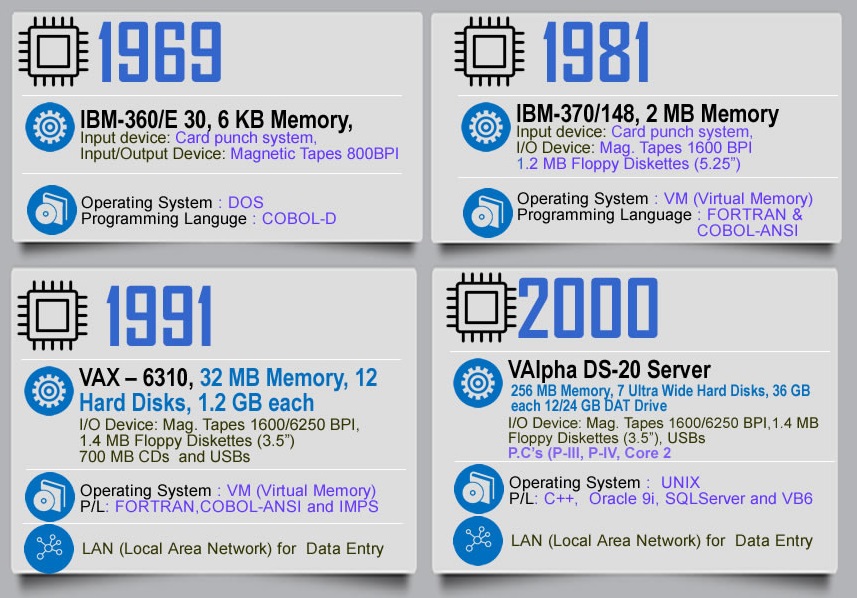 After 2005, GIZ helped a lot by providing latest computer (Hardware/Software) through German technical support program.  In December, 2011, Pakistan Bureau of Statistics (PBS) has been formed after merging of three attached departments of Statistics Division i.e. Federal Bureau of Statistics, Population Census Organization and Agriculture Census Organization and its technical Cell. PBS is shifted to new building, Statistics House, in mid of 2012.   GIZ provided their economic support in establishment of a large networking system in new building of PBS  and acquiring latest hardware/Software through their technical support program. Besides GIZ, UNFPA also assisted the PBS by providing ICR machines & other equipment for processing of upcoming 6th Population & Housing Census.